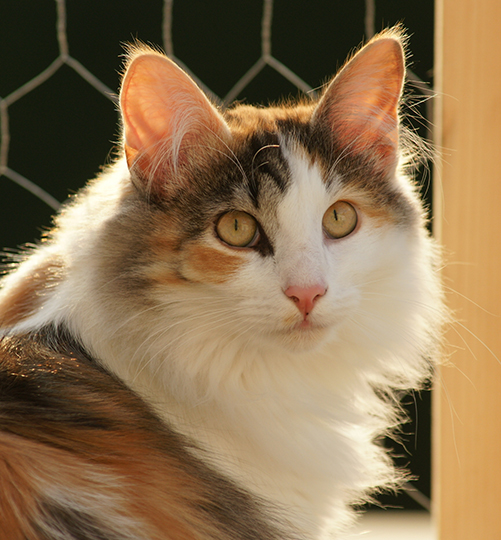 Elisa, nicknamed “Zézette” : a graceful porcelain, sweet, feminine, always elegant, with a sharpened mind. She spends most of her time lying across her friend Eliot. 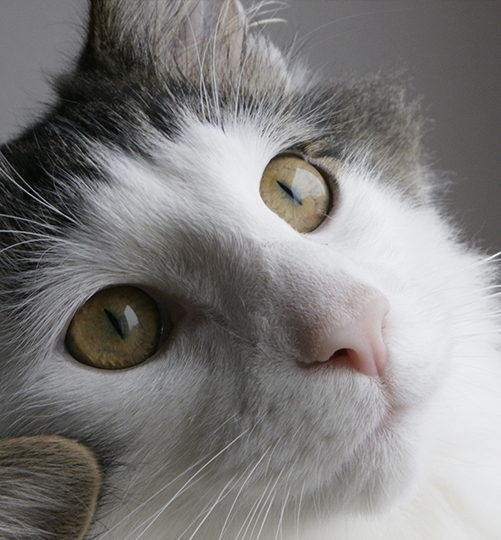 Eliot was a very peculiar cat, uncontested and respected leader, at the same time big brother of all and Elisa’guru,  he loved every body anybody was loving him.
Eliot received homages from all the gang, with kindness and modesty. He adored kitten and manifested a lot of goodwill to them.

He took such a place in my heart, that I can’t resolve to withdraw him from this page. He was always behind the door when I came back home and slept every night on my pillow, above my head. He was the kindly soul of the house. 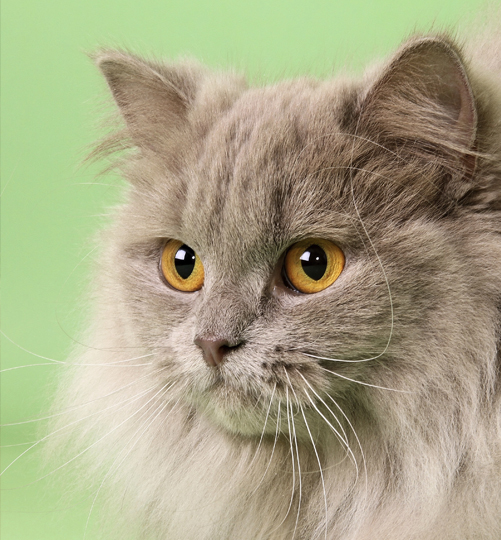 Neutered, lives a happy life, retired to Hélène and Raphaëlle’s home, in Versailles, with her friend Kookie. 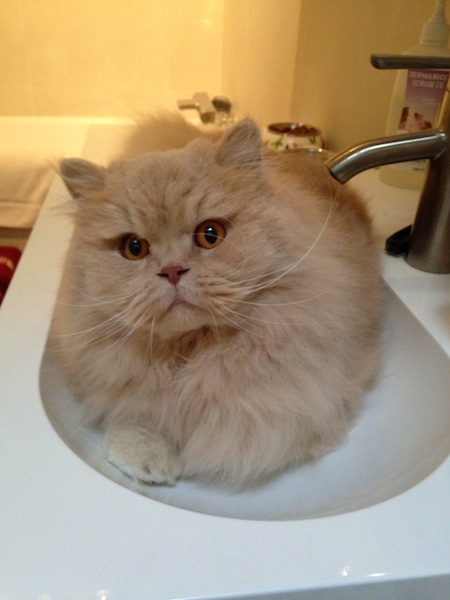 Cuddly Vladi, always showing his belly, laying flat on his back to be caressed, or putting his paws around neck when in arms. Now he lives not far from cattery, in a house where he is beloved and pampered by a very attentive retired couple. A happy cat ! 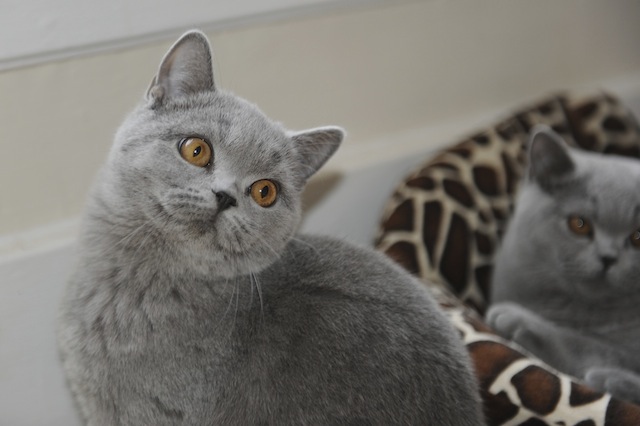 Blood Group : A or AB non carrying b. Genetic Identity.

Gaby is a playful and keen clown making you melt at the first sight ! A climbing champion, agile like a squirrel. Gaby is retired  with her niece Maybe (see kitten in their family), in a loving and attentive family, where she can train her climbing and exploring skills. Such happiness for her ! 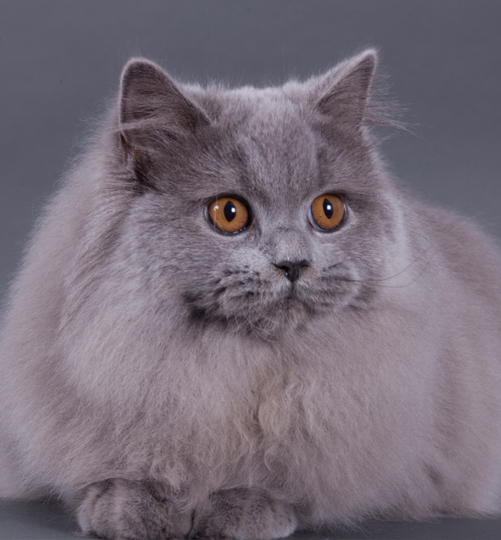 Pitchoune, a very good company female cat, with big size, calm and joyful mood. A charming contrast between her intense orange eyes and the sweet color of her fur.

Her look is now turned towards another British cat and 2 Bouvier Bernois dogs at a couple’s home loving cats and dogs. Pitchoune rapidly appreciated her new 4 legs mates and is grateful to her new family for taking great care of her. A good future life ! 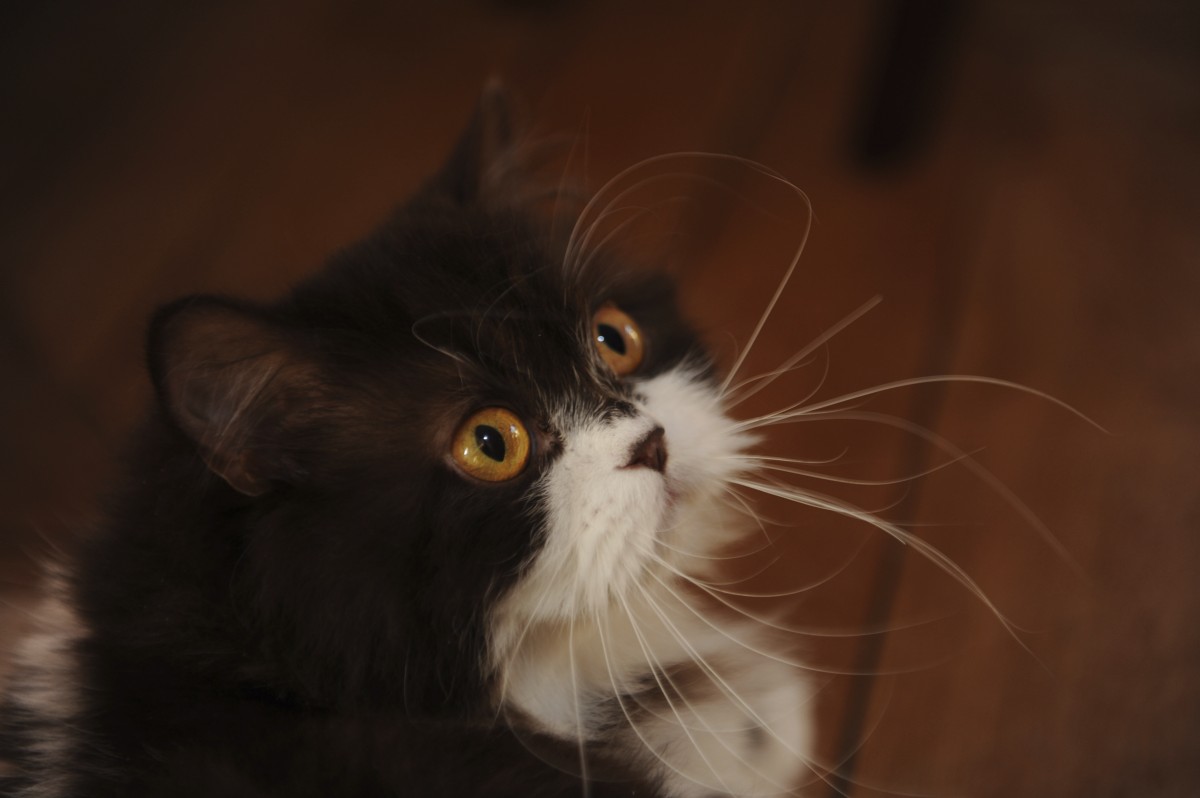 Houbi, a tender and irrésistible charming cheeky monkey, always looking for cuddle or foolish thing, likes to come and tell her new experiments. This multi facet pussy cat  has a too strong personality to live in a group, so she has joined Linou at Aurélie’s home where she plays Juliet with Linou her Romeo.

Jinger, joy recipe : present, mischievous, purr machine, happy blend of her so affectionnate father and of her mother cuddly as well, but with an assertive personality.

Korel, with his big round eyes and his tender look, is a cute cat, mischievous, playful, lively and wonderfully affectionate.

F2 (2nd génération of the “blue eyes” program introduced to colors without white in British breed).

To know more about “projet céleste” cliquez ici (sorry it is in French) and on genealogy cliquez ici (also in French) Program on the initiative of Sophie Guittonneau (chatterie d’Aerlin), in collaboration with, Ghislaine Michel-Paulsen (chatterie de Virvarnon), Vanessa Marmolejo, et Martine Salomon (Chatterie des Joyaux de Millau) supervised by Alyse Brisson  (féline judge and books writer about color genetic) and genetically overseen by Marie Abitbol and Lucie Chevallier (geneticists from l’Ecole de Maisons Alfort). This program is approved by  LOOF at expérimental title (genealogy registered, without belonging to a breed for the moment, that is the goal to reach at génération F4 or F5).

To Nyx (night goddess), any way is good to request cuddles, till tongue kick on the nose when purring, paws pressures and whisker’s touch are not enough any more. Such sweet and kind pussycat, makes you melt night and day, by sunny or rainy day.

Blood Group A carrying b,

Utrillo, a sweet “glue” with thousands enchanting vocals to say hello and to get attention.

He is always asking for a hug and purring generously. How not melting with emotion in front of such a teddy bear.